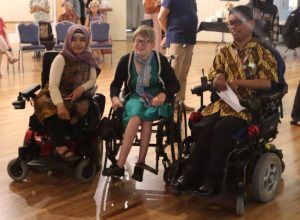 John Duthie attended the opening of an exhibition by Faisal Rusdi at the City of West Torrens library.  John and Faisal have known each other for several years through the disability community.

Faisal is contributing his life story to the book “MYdisABILITIES” and the website can be found here.  He paints using his mouth, and his exhibition presented 19 paintings which took four months in the making.  The leader of Dignity Party, Kelly Vincent MLC, opened the exhibition and is pictured with Cucu Saidah and Faisal.

Faisal is a member of the MFPA (Mouth and Foot Painting Artists) and has exhibited in many countries including Japan, Singapore and Myanmar.  The current exhibition runs until Sunday 3rd December 2017.  John was keen to support Faisal, and purchased one of the artworks “Granite Island”. 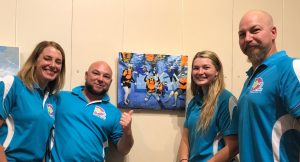 The Determined2 team turned up in their colours and were photographed with a work that was painted in their honour.   The founder of Immersion Therapy, Pete Wilson, purchased the painting as quickly as he could.

John is pictured below with Cucu and Faisal. 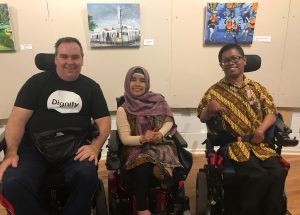 Faisal was born in Indonesia with cerebral palsy and was paralysed between his hands and feet. Although it took him some time to accept his way of life, he now loves life. Art is a big part of Faisal’s life.

He could spend up to eight hours a day, on the ground, supporting himself with his elbows. This position allows him to paint with a brush between his teeth. The smell of the paint can sometimes cause problems with breathing.

Faisal came to Australia with his wife, Cucu, Saidah, to support her as she studies at Flinders University. He has written a story about his life in Australia and hopes the book will be available to Indonesians.