In remembrance of Joyce Dorothy Duthie 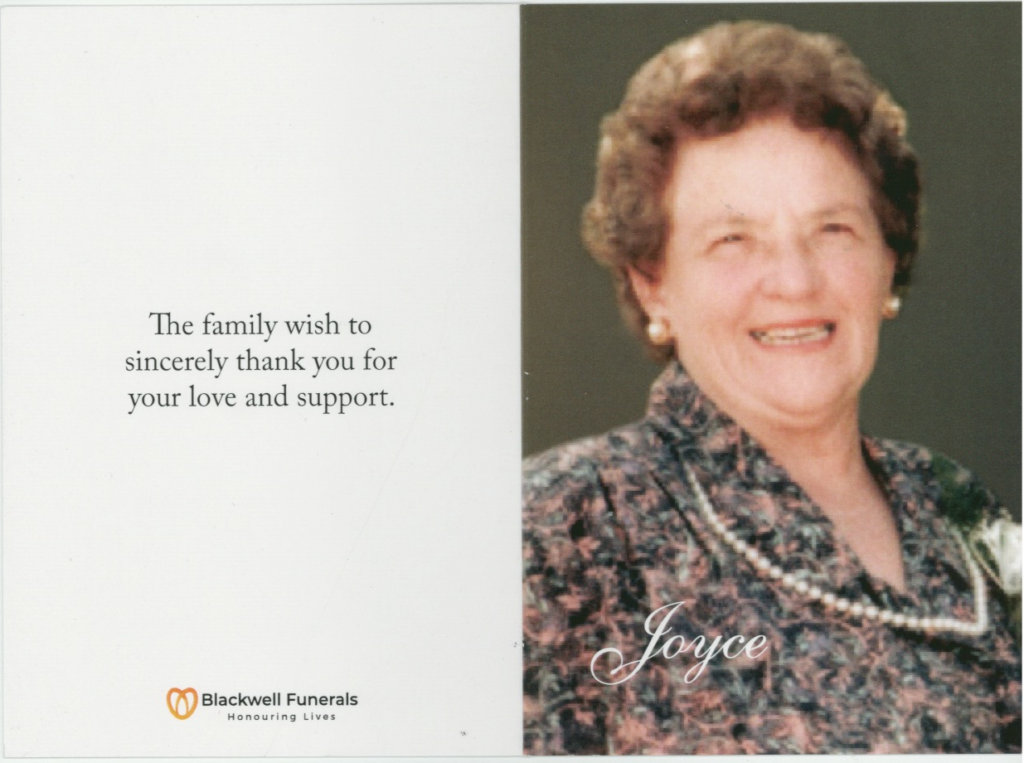 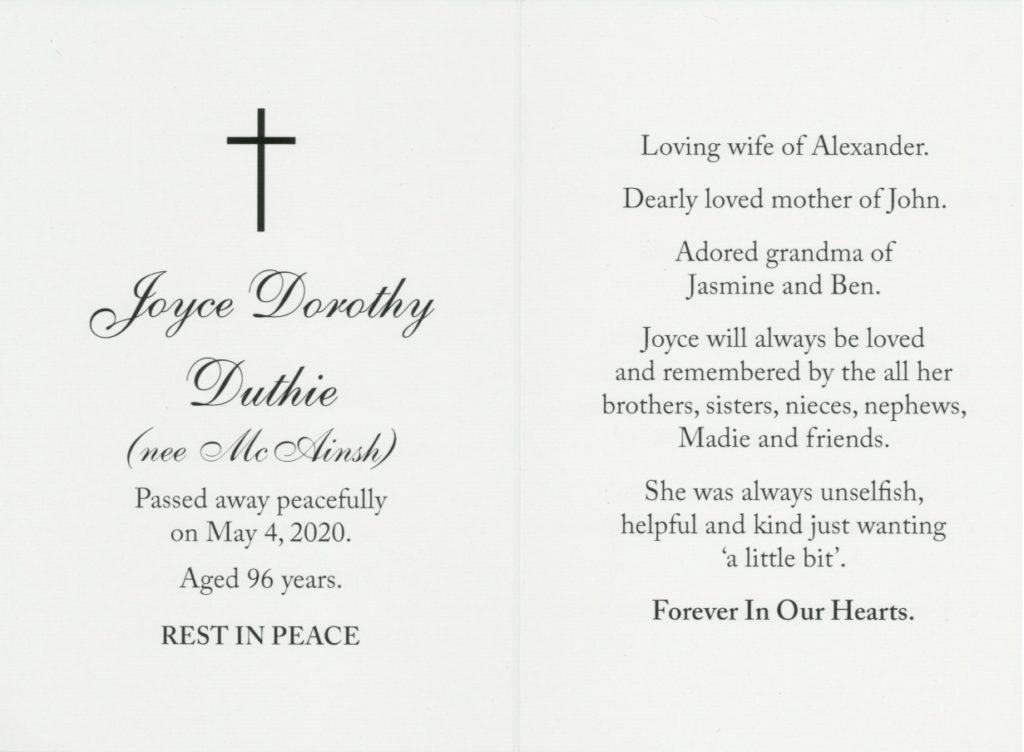 Photos and videos of Joyce

The youtube video is in two parts 1) A video of 40 photographs with her favourite song as the backing track – ‘You don’t bring me flowers anymore’ by Barbara Streisand and Neil Diamond. 2) A collection of videos.

Hello, my name is Doug Oakley and I’m a civil celebrant.

We’re here today to give thanks for the life of Joyce, to celebrate her life.

Joyce Dorothy Duthie was 96 and, in terms of years, had a pretty good inning, which can give some degree of comfort, but I’m sure it still doesn’t take away the sense of loss and our deepest thoughts go to you all, especially Alex together with John and the wider family.

Thank you to friends who’ve joined us…for your support. I’m sure that support is being given by others who are not able to be with us, especially because of the restrictions brought on by the Corona Virus.

Joyce Dorothy Duthie was born into a far different world than the one we know today. To put it into some sort of perspective, I looked up an Advertiser, dated Sat. November 10th 1923 [Joyce’s actual birthdate] and I discovered, on the front page, in a sale at Birks [now David Jones] suede gloves on special for 8/11 [89 cents] a pair. At Moore’s, in Victoria Square, I could have bought a pair of men’s socks for 8/11 [89 cents] in the Real Estate section on page 4, there was a house for sale in Prospect for 1,150 pounds.

Haven’t the times changed and Joyce would have seen so many changes and different events throughout her life.

More importantly, there are the memories you have of Joyce.

I think it was about 5 years ago when John asked his mum a few questions about her life. And, in that exchange, she shared how her proudest moment was the day that she married Alex…while her biggest achievement was bringing up John and caring for Jasmine & Ben. One of her most challenging moments was when John had his accident in 2009 while, on a far lighter note, some of her funniest moments came when Alex was driving in a harness race. Joyce used to get so nervous that she’d have to go to the toilet…and she’d miss the race!

It’s an obvious conclusion that family was so important to Joyce.

Joyce grew up in Olive Street at Prospect [between Churchill & Prospect Roads] where the family operated a dairy. It’s hard to imagine milking cows in this part of Adelaide but that’s what they did…and the milk was then delivered to the people in the area.
They were a good, hard-working family and, not only that but whoever turned up on Saturdays and Sundays, would be welcome to share in the roast prepared by Hettie. Joyce cooked a pretty good roast too!

Because they lived at Prospect, it was only natural that they all barracked for North Adelaide in the football. Two of Joyce’s brothers-Robbie & Dougie had played for the Roosters. I suspect it was a bit difficult for Joyce when she married into a Port Adelaide family. And she did make the switch to the Magpies with her favourite player being Russell Ebert. There are still newspaper clippings highlighting Port in her spice cupboard. She later followed the Power although she still had a soft spot for Collingwood.

As a young girl, [as was the case with many families of that era], Joyce went along to church 3 times each Sunday.

Joyce did her schooling at Nailsworth and, was generally well behaved…except for the day when she spent the money for her bus fare on lollies and she had to walk home!
In her younger days, Joyce played basketball [now netball]

When her school days were over, Joyce worked for Sharples, a printing company on Hindley Street [next to the Victoria Hotel].
One day, Joyce met Alex at the Adelaide Railway Station and, over time, they got to know each other as they travelled on the same line with Joyce getting off at Dudley Park and Alex continuing on.

Obviously, the friendship developed as they did a lot of walking around the North Adelaide area, going to the Piccadilly Cinema or, perhaps, heading out for a feed of fish & chips.

Joyce & Alex were married at the Brougham Place Methodist [now Uniting] Church in North Adelaide on February 10th 1951. Joyce continued to work and this included doing babysitting for friends…that is until John came along in 1965.
When Joyce & Alex first got married, they lived in Marian Place at Prospect. Later on, they lived across the road from Prospect Oval before shifting to Marden into their brand-new home in the mid-60s. It remains the family home.

Joyce did enjoy her getaways with Alex [and John when he was younger]. She particularly liked to go to Victor Harbor and Mildura. And she also enjoyed the trips with Alex & John to Sydney & Melbourne.

A few days ago, Alex was looking in one of the drawers at home and there it was! It was John’s school jumper [well, part of it] for his first year at primary school. It was something that Joyce had always intended to finish! I have a feeling it might remain a family treasure.

So, these are a few memories that Alex & John shared with me. Good memories and, as Alex said to me, Joyce was someone who had no enemies. She did make friends with ease.

In recent times, Joyce had her challenges especially with her failing vision but, over the past 3 years, Alex has been there as her carer. Well done, Alex.

There’s no doubt that Joyce leaves many good memories.

Thank you, Doug, for the rundown of the facts and figures of the life of my mum. I will be sharing memories of my experiences with her, hoping it will help us celebrate her life.

Hettie and Harold had 10 children, and mum was the last sibling to pass away. It is fitting that I commence by sharing my experiences and thoughts of mum’s immediate family. Harrold, as well as Auntie Betty Mary, passed away before I was born.

Hettie was a hard-working person, both with the work on the farm as well as being a mother of 10. A character,  with a great sense of humour. Each Sunday afternoon, she would open the family home and a large crowd would gather. Auntie Audrey would make scones and never talk. Many XMAS evenings, we gathered there or at the homes of her children. The men would play poker and drink beer, and once I got grandma’s dog drunk. Grandma would play snakes and ladders with me from an early age, and kept playing, although her vision failed. It made it easier for me to cheat. When Hettie took her medication, it was advisable not to sit opposite her at the kitchen table. She wouldn’t swallow the meds, and instead, spat them across the room, hoping no one would notice. Hettie passed away at home at the age of 96. The same details as my mother.

Now my mum. Every funeral I’ve attended just mentions good things about the person. I am going to share a few bad things, as no one is perfect :-).

And now the good memories…

I had a happy childhood and never lacked anything. As I was an only child I didn’t have to share. Carmel would come over and stay at times. I remember gathering autumn leaves at the Botanical Gardens; going to the zoo; holidays in Melbourne and Sydney.

Mum went to a Methodist church in Prospect, and she sent me to Sunday School at Payneham Methodist church. Mum and Dad provided great educational support starting with mum walking me to and from kindergarten, and primary school until I was old enough to do it. They supported me through high school and university, and in 1983 I attempted to get mum to use a computer.

Mum supported me during the marriage, and with my children, Jasmine and Ben. She ironed our clothes every week and did babysitting each and every time she was asked. Mum loved being with Jasmine and Ben.

My accident in 2009 commenced a difficult for Mum but kept coming into hospital to see me. She put on a happy face,  enjoyed hearing about my progress through the 14 months of ICU and then rehab. Dad also spent over a year continually in hospital when broke leg just after marriage.

Later in life, Mum’s health deteriorated including her vision and hearing, and recently cancer, but was able to keep living at home. The only help my parents received in life was a gardener. That’s quite an achievement.

Mum will be remembered for

Song by Jasmine and Ben Duthie

The song is Satisfied in you (Psalm 42) by the Sing Team.

Thank you for taking the time to remember my mum. 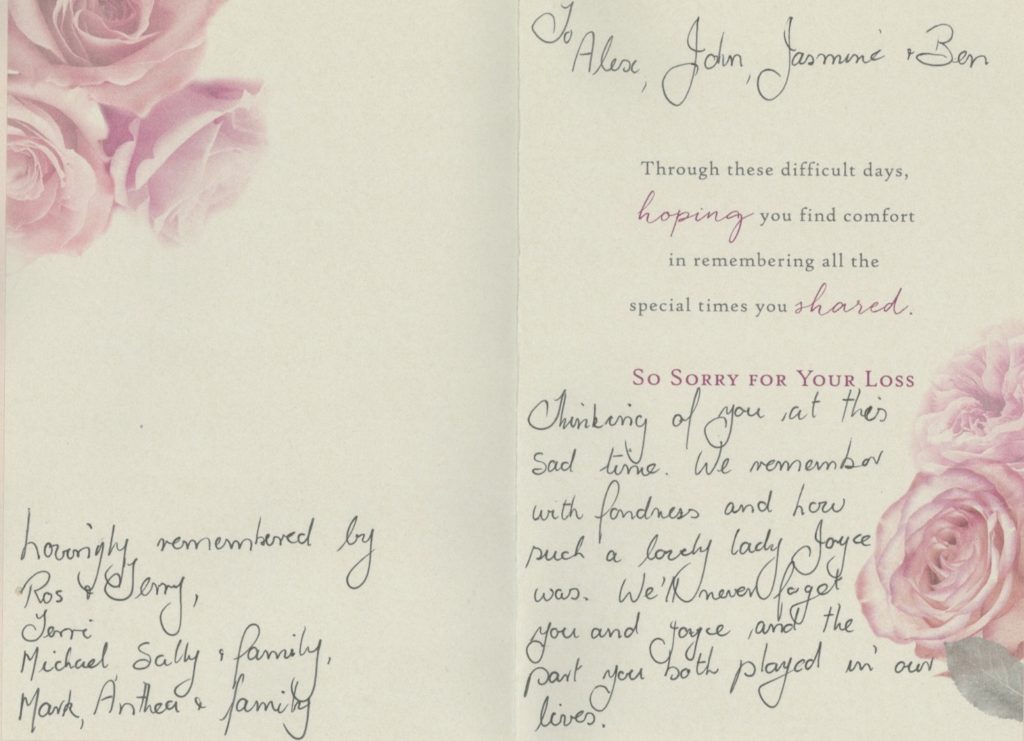 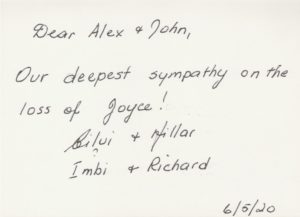 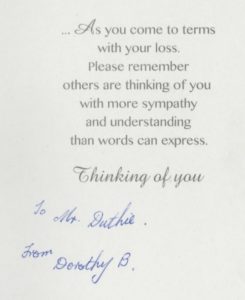 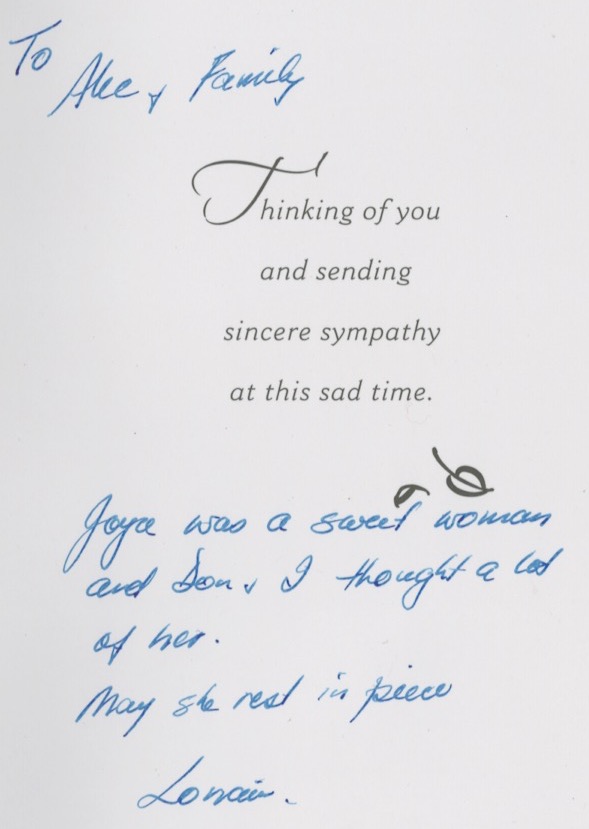 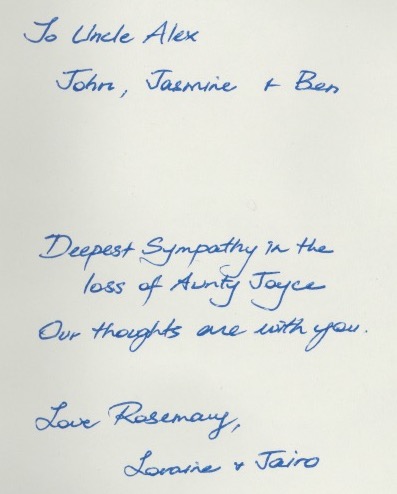 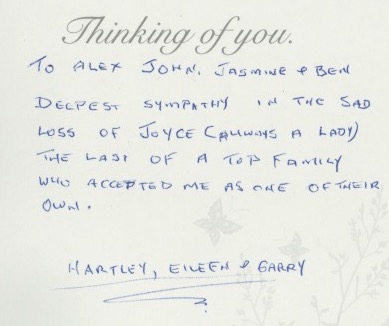 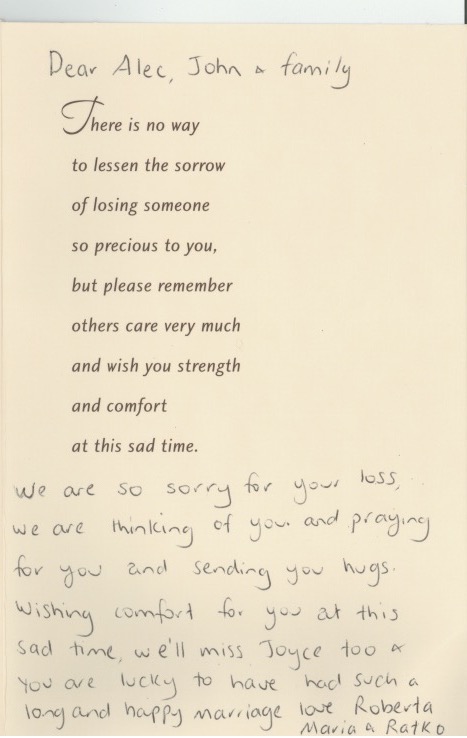 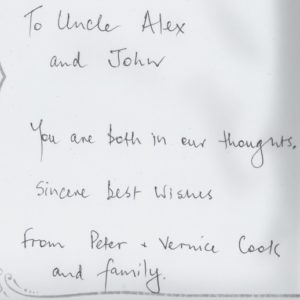 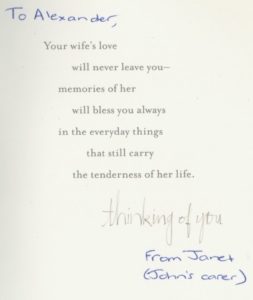 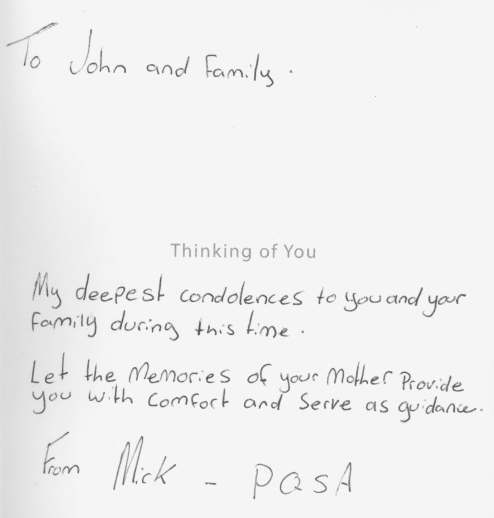 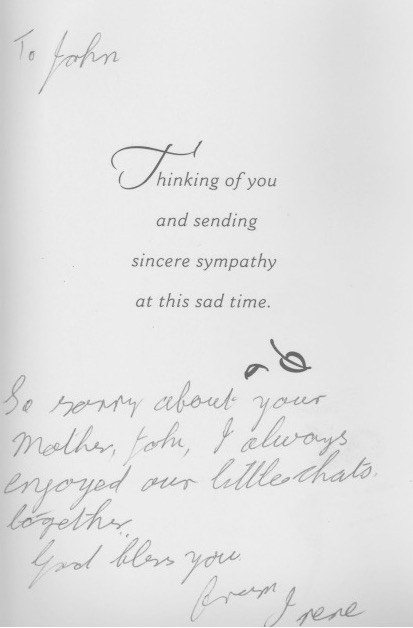 1 thought on “In remembrance of Joyce Dorothy Duthie”